How Did Different Languages Originate? 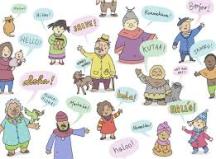 WITHOUT THE ACCOUNT OF THE TOWER OF BABEL IN THE BIBLE’S BOOK OF GENESIS, we would have no idea how the many languages of the world came about.

Language scholars have marveled that there are so many languages in the world and that all have a type of grammar. They marvel that there is no such thing as a “primitive” language, because even cultures that seem primitive have languages as complex as modern cultural groups. Evolutionary psychologist Steven Pinker noted in his 1994 book The Language Instinct that “There are Stone Age societies, but no Stone Age language.”

Interestingly, the earliest records of written language date no further back than four or five thousand years (the time, according to Bible chronology, that the Tower of Babel events would have taken place).

What was the Tower of Babel?

Babel was a city founded by a warrior named Nimrod on a plain in the land of Shinar in ancient Babylonia. Babel means confusion. The history of the building of the city and its tower, “whose top may reach unto heaven” is described in the Book of Genesis (chapter 11). Nimrod is an ancient hero known to have existed not only from the Bible, but from Sumerian and Assyrian records as well.

The Bible record bears all the marks of a reliable historical account, for it is generally assumed that the tower was what archaeologists know as aziggurat: a multilevel pyramid-like tower with a ramp to its temple on top. (The picture below shows the Great Ziggurat at Ur in Sumer.) Some Bible scholars believe the Tower of Babel became the prototype of all the great ziggurats and pyramids of the world.

Above: The Great Ziggurat of Ur

The Bible gives us an excellent history of what happened at Babel that gave rise to the different languages in the world:

Above: Reconstruction of the Great Ziggurat of Ur

Note that the Bible does not say that God created a whole pile of exotic languages from scratch at Babel. It says He confounded or confused the one language that everyone originally spoke. So the elements of grammar of that original language would still be there, and similarities in many words and expressions would be an obvious outcome.

Language appeared abruptly. This fact seems totally alien to the idea that humans evolved over millions of years from ape-like animals. There are no human-like languages among apes, and what evolutionists believe to be our closest ancestors are completely incapable of making speech like we do (for example, the hypoglossal nerve canals in chimps are only half as wide as in humans. These nerves supply the muscles of the tongue and hyoid bone).

Chimps have severe limitations on their speech

Chimps may be taught to do certain things when they see human-created symbols or letters, but chimps are incapable of coming up to someone and exchanging philosophies in a language that both understand. (It may be argued that human babies cannot do this either, but human babies can utter words very soon after they are born, and can tell you what they want at a very young age, even before they can write. Apes cannot speak anything like human languages at any age.)

What we are left with is that the Bible’s explanation and timing for human language appearance and dispersion completely fit the facts in world history as we know it. On the other hand, evolution has no support for the idea that language evolved from animal sounds, or explanation as to why written language appeared suddenly about 4000-5000 years ago, or how grammar came about.

If someone is looking for an explanation of the origin of language, the Bible’s explanation fits the known facts.

This entry was posted on February 10, 2016 by Melwyn Misquitta in BIBLE, END TIMES, GENERAL, SPEECH, Uncategorized, WORDS and tagged language.

Br.Melwyn Misquitta is the founder of WITNESS MINISTRIES, broadly acclaimed for his ability to apply the principles of the Bible to practical situations and the challenges of daily living. In 1999, the Lord touched Br. Melwyn in an unique-miraculous way. Br. Melwyn was paralysed and during this illness, he was witnessed by a believer, about the Word of God, which stirred up his faith to receive complete- miraculous healing. In 2000, Br. Melwyn gave his life to Jesus. In 2002, After graduating from RHEMA (INDIA), Br. Melwyn knew by experience the impact of understanding and acting upon the principles in the Bible. One of the simple but impacting truth that he discovered in his Bible study at RHEMA (INDIA) was that God wants us to be a witness in every area of our life. God put on his heart to witness this life changing truth of the Word of God to different sections of people and also to raise up witnesses for Christ. Thus Witness Ministries was founded. Br. Melwyn is basically called to teach the body of christ. He is now pastoring churches at Navi Mumbai and Thane District along with his wife Pastor Ruth [Hazel] Misquitta who is also a worship leader and walks in the calling of a prophet.